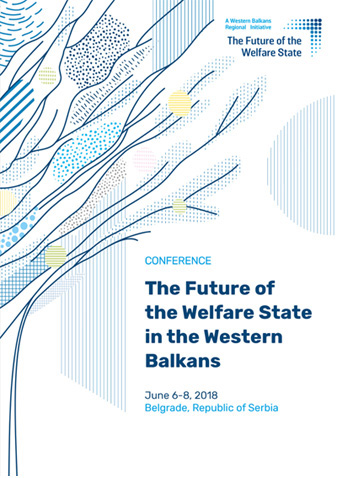 The regional conference “The Future of the Welfare State in the Western Balkans” will be held in Belgrade, from 6 to 8 June 2018.

Over 200 key stakeholders from the Western Balkans and EU member states, development partners, civil society organizations, representatives of the academic community, social partners, etc. will gather at the event in Belgrade, to work together on shaping the regional agenda of the welfare state.

The three-day event will cover 4 panel discussions and 13 thematic group sessions dedicated to specific aspects of welfare state issues. Furthermore, the conference will kick-start two regional initiatives that will work further on improving the welfare state in the region: the Initiative for Improved Governance of Social Sectors in the Western Balkans and the Initiative for Future-Oriented Welfare State Policies.

The regional conference “The Future of the Welfare State in the Western Balkans” represents the backbone of the eponymous initiative started by a group of independent think-tanks and researchers from Western Balkans countries, with the aim of joint action in areas of importance for the welfare state in the region.

The challenges faced by welfare states in the Western Balkans are significant, partly specific, and even more expressed compared to more developed countries. Poverty and the risk of poverty in Western Balkans states are at a high level within the European context. Most countries have a very low gross domestic product, unfavourable social situation, high unemployment and inadequate outcomes in the field of education and healthcare, as well as inefficient executive powers and administration. Regionally specific challenges include high emigration, a significant share of long-term unemployment, as well as widespread grey economy. We can expect the intensification of changes in household structure and acceleration of European integration to have a particular impact over welfare states in the future. The regional initiative endeavours to provide an additional contribution by affecting existing processes aimed at sustainable reform in the region, such as economic governance and economic reform programmes, the process of EU accession negotiations, the employment and social policy reform programmes. One of the goals is improving the social aspect of European integration in the Western Balkans.

Since Western Balkans states are facing numerous obstacles and challenges that require a social response with clear guidance, the idea of the regional initiative is to create a space for long-term analysis and targeted action through annual regional meetings of the most prominent researchers and leaders in society. As part of a regional participative process, the annual “The Future of the Welfare State in the Western Balkans” conference will provide guidelines on how social science researchers can support policy creators in developing sustainable social policies aimed at the needs of vulnerable groups. Driven by this idea, the regional conference represents an important mechanism and channel for action, with the vision of becoming the most relevant event dedicated to welfare state issues in this part of the world.

The event can be followed on the Facebook page and Twitter profile of the Regional Initiative, and all conference materials will be available at futureofthewelfarestate.org.

The regional initiative and conference “The Future of the Welfare State in the Western Balkans” is supported by: UNDP Serbia, PERFORM, ILO, UNICEF Serbia, Regional Cooperation Council – RCC and Open Society Foundation Serbia.